Hero Tower Wars is a game where the player plays the role of a hero trying to break through the ranks of monsters to rescue the captured princess. You will use your power to attack these monsters, and you will receive power-up items. At the same time, you also find an empty piece of land where you can build your kingdom.

Players will continue their hero’s journey through the various towers in Hero Tower Wars as the new version introduces many challenges that they must overcome. Specifically, the Christmas event takes place with impressive levels that they must overcome. It is absolutely necessary to collect impressive skins for their characters. In addition, some levels are also decorated to bring the atmosphere of this holiday to other players.

Things do not stop there when new levels have just been added to this game for players to complete. They will continue to overcome many powerful enemies with different looks, and they will consider specific strategies to overcome them and pick up the necessary weapons to increase their strength.

KNIGHT’S JOURNEY TO RESCUE THE PRINCESS

The story begins when a mysterious dragon has captured the princess, and the hero is still clinging to its legs to try to save the princess in Hero Tower Wars. But an unfortunate thing happened when he was knocked over by the dragon and fell to the lowest tower floor when it reigned at the top floor and was waiting for him to come to the test. At the same time, to reach the top floor, you must overcome many different enemies, and of course, your strategy is to take power to destroy them.

The match rule is understandable when you see the character and the enemy; you will drag the character towards the enemy’s position that you want to prioritize attack. At the same time, there will be numbers corresponding to the unit of power they currently possess at the top of the hero and monster’s head. So if the hero and monster meet, then one side will automatically takedown if the power stat is lower than the other side. It can be said that power is the decisive thing in this game.

OVERCOME MANY CHALLENGES AND BUILD YOUR KINGDOM

It would help if you considered a strength when heroes attack monsters in Hero Tower Wars, so you will find many things that can increase or decrease strength. You can see the monster’s power number, and it will be yours if you defeat it. At the same time, some items have power plus and minus effects, so you will choose the order to pick it up. There will be a reward bar that helps you unlock mighty skins, and its energy will increase when you complete a level.

Besides defeating the enemies and saving the princess, your job is to build a kingdom. You will have yourself a vacant lot with some buildings already built and one of them downright shabby. So you will use the resources you get to make new buildings and gradually help the land grow as the old things have been upgraded to receive a new look.

A tower full of monsters is waiting for the hero to conquer: 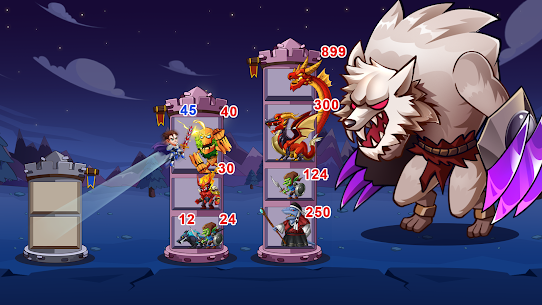 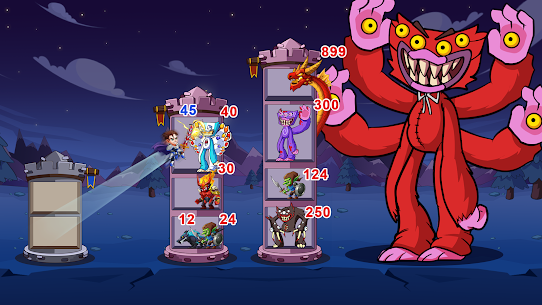 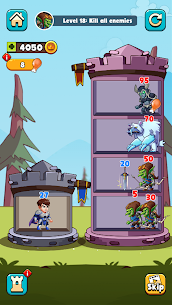 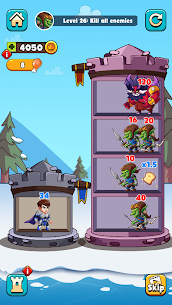 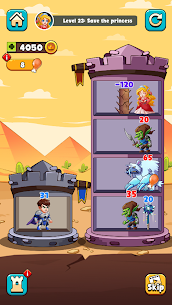 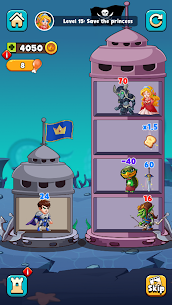 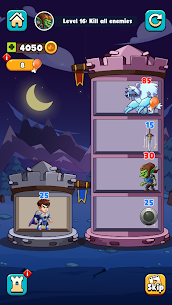 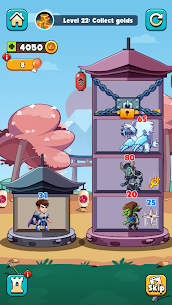