A casual RTS where you place weapon buildings on squares to strengthen floating islands and fight! Abundant base content!

Clash Of Islands: War is a casual RTS that fights by deploying attack buildings such as cannons and crushing rams to strengthen floating islands. It’s a marine adventure with a unique worldview, set in a setting where armed floating islands fight each other. Build buildings on the squares of the island, and not only attack, but also build fields and houses to raise funds. In addition to fighting on floating islands, challenge various contents at your base and set off on an adventure to the ocean! 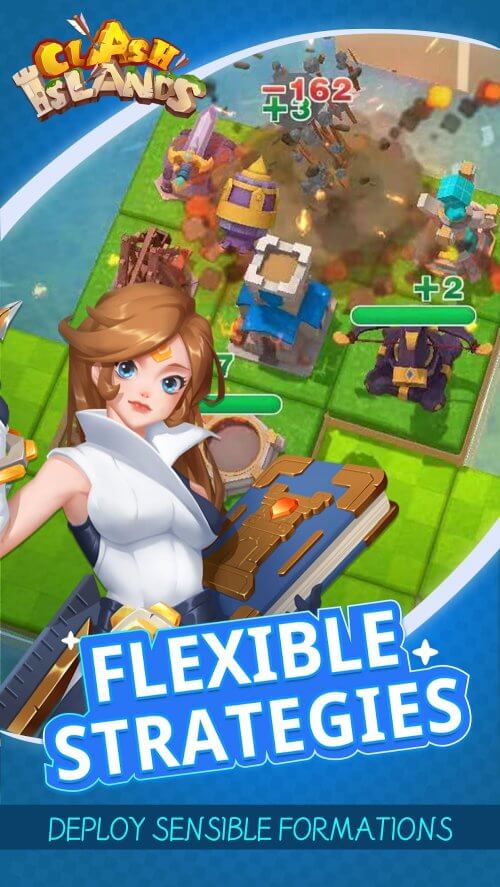 Auto-battle by placing attack buildings such as cannons on the island!

Change the placement and bombard each other! Formation decides victory or defeat! Place various buildings on the squares of the floating island to create a formation to attack your opponent. Combat is fully automatic, so what to do with this formation is essential. If you destroy the opponent’s main hideout, you will win, so you should aim for the hideout by taking advantage of the characteristics of each building.

There are buildings with various characteristics. It’s not just the placement; it’s important how to strengthen it. Each building can be upgraded using funds. The level cap will be the level of the main hideout, so the most important tail will be the level up of the main hideout. In addition, you can earn funds by setting “marks” on the weapons of the building at the base and by acquiring luggage from puzzles and “trading” them. Use various contents to strengthen your floating island.

The first formation is this, victory or defeat is determined by how you arrange it. The point is that various strategies can be set up by placing buildings and changes in the island’s shape. Although the battle is automatic, you can change various formations, such as where to place the main hideout and where to attack the opponent. Looking at the opponent’s formation and changing the layout of your island to capture it is quite profound.

Abundant content that is not just fighting on floating islands!

It’s usually a story mode that captures the stage, but there’s also a PVP mode that captures other players’ floating islands. There is a lot of bargaining involved in deciding how to proceed, so this is also a mode where you can take your time. In addition, the above-mentioned “trade” is a merge puzzle, and even this alone can be played as one game. It feels like a collection of various mini-games, so it’s fun just to rotate them.

You can also enjoy the world view such as the setting of a floating island and the battle with giant marine creatures! A fierce battle with a huge boss character! fantasy world. The world view where battles between floating islands in the ocean are unfolding is unique and attractive. In the story, in addition to battles with rivals, there are also giant marine creatures that appear as boss characters, and it is quite interesting as a marine story.